In 1882 Robert Koch discovered the TB bacillus—one of the human race’s oldest pests—and one that continues to infect about one third of us. The bacterium doesn’t rate high in our awareness in comfortable Middle America because it tends to thrive in poverty and rides piggyback with other ailments like HIV, also rampant in the third world. A latent form of the microbe hides out within us, however, ready to strike when opportunity arises. Such dormant TB recently turned up in 120 Longmont students in Colorado and among college students at CU.
The May issue of the North Forty News will carry my article about some good news regarding TB: CSU researchers have found a way to keep TB cell walls from forming properly—a discovery that may provide a potent new weapon for replacing antibiotics that are rapidly becoming ineffective. Check in at www.northfortynews.com sometime after April 24. The article will be under “Science and Nature.”
I created the following image of Koch and his microbe discovery using white pencil and charcoal pencil on blue matteboard. I feathered the boundary in Photoshop. I believe the monocolor approach will work well on other future projects. Pencil is still an effective medium. 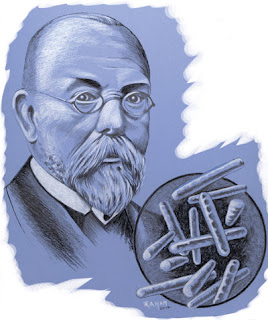 Posted by Gary Raham at 6:31 AM No comments:

The world through an insect's antennae

As humans, we feel pretty special about our mega brains and our visual acuity, but insects interact with the world in quite special ways. I had a chance to explore these amazing sense organs in a recent article for Colorado Gardener magazine. If you get a chance, take a peek at: http://digital.publicationprinters.com/publication/?i=106273

Here's an up close and personal view of a Rove beetle's ostentatious sensors:

Posted by Gary Raham at 3:59 PM No comments:

Marketing in an e-pub Universe

The following recently appeared in the Colorado Author's League newsletter, InPrint, but I believe other writers will find it of interest.
I recently created my first Kindle e-book: A YA SF tale called A Singular Prophecy. I’ve traditionally published many times, but like other authors I smell change on the wind and don’t want to face a digital publishing stampede ignorant and unprepared. I would like to make a killing, but don’t want to be trampled by behemoth publishers also deciding which way to bolt. Marketing, the weapon of choice for authors and publishers hunting for fame and financial success seems to be morphing in our hands, even as we take aim and prepare to fire.  Individual authors should take advantage of their small size and agility rather than closing their eyes and hoping for the best.
Helpful old school marketing strategies
Authors know about book signings, school visits, presentations at various venues, and radio and/or TV spots, but the effectiveness of these venues is waning. Local book signings and book launch parties can still be useful for practicing speaking techniques and reaching core audiences of friends and acquaintances. Signing tours, unless sponsored by a publisher, can be expensive in both time and money. Schools have less money for author visits, although writers can now save time and lodging with Skype appearances. For ex school teachers, like myself, these visits also provide a chance to meet our audiences in person and witness the birth of intellectual passion in young eyes.
Presentations provide exposure to a wider audience, but usually involve more travel and some expense. I’ve presented at science teacher conferences, reading conferences, science fiction conventions, and smaller venues like senior centers and gift stores. Sometimes authors get paid for such gigs, but often present to sell a few books and network. My science titles never seemed ripe for talk shows, but I have done some Bookends TV interviews for the local educational channel, benefitting some teachers and insomniacs.
Blogging & social media: New marketing keystones
Patricia Stoltey, author of The Prairie Grass Murders and The Desert Hedge Murders, is a silver domed veteran like me, yet she has embraced the new online media and is plowing furrows and planting seeds that will grow audiences for her next books. Stoltey took a year off to establish herself as a blogging presence. Her site, http://patriciastoltey.blogspot.com, is subtitled “Thoughts about writing, Colorado authors, social networking, and getting published.” She accepts guest bloggers, does occasional interviews, makes guest appearances on other blogs, and contributes to group blogs, such as Chiseled in Rock. “After doing a lot of homework,” she said, “I realized how important it was to build a network of online friends just as we work to establish a network of writers and readers through writers groups, book clubs, conferences, and conventions.”
Stoltey advises writers to use tools like Book Blogger Directory (http://bookbloggerdirectory.wordpress.com/) to find bloggers who read and review the kinds of books they write. Writers then need to follow likely blogs for a while, participating in discussions, and look for opportunities to get their books reviewed and make connections with like-minded readers and writers. In a sense, writers can create a network of contacts almost the way experience in the real world builds neural networks in the brain. Writers build virtual memories of themselves and their work that can grow quickly and endure.
I discovered another growing network developing specifically around e-books, like those produced for the Kindle. Candace Cheatham is Associate Editor for Kindle Nation Daily, a group that donates Kindles to classrooms. Students review YA books to receive credits to expand their e-libraries. Students look for low or even free titles to purchase or borrow, but if they like a book, the potential exists for a title to take off. (See http://kids.kindlenationdaily.com/)
Blogging, twittering, facebooking, and such work together to create these virtual networks. Managing all this social intercourse can compromise a writer’s sanity. I ran across another resource called “How to Set Up Your Social Media Listening Dashboard.”
(http://www.risdall.com/listen/RMGSocialMediaListeningDashboard.pdf) This white paper outlines how to optimize your social media experience by learning how to effectively listen to these inputs and then employing a strategy of identifying objectives, strategizing action plans, using those plans, and finding ways to measure their effects.
E-publishing can be liberating
Experienced SF author, David Dvorkin, author of Time and the Soldier and Business Secrets from the Stars, has created e-book versions for 15 old and new titles—many out of print and languishing in files and hard drives. “I never intend to approach a traditional publisher again,” he said. “I’m filled with enthusiasm for writing again, and I’m more productive now than I have been in years. I know that the books and stories I write will be published—without the absurd delays imposed by the nature of traditional publishing’s small-minded dinosaurs.”
Dvorkin and his wife even created an e-book publication business by designing covers, editing, and formatting books for other authors. (See http://www.dvorkin.com/ebookpubhelp.html) Those who e-publish need to be aware that if they can’t design and edit books themselves they will have to buy those services. Inexperienced writers still need the filters of writing groups and editors until they can recognize their own professionalism.
Dvorkin recognizes that we live during a time of transition. He advises unpublished writers to pursue a traditional agent-to-publisher route for the time being. He also claims that five years from now he expects to offer this advice: “Pay no heed to the desperate traditional publishers in their business death spirals. Self-publish your work as an e-book.”
Whether or not his specific prediction and timetable pan out, writers will do well to stay alert and attentive. “The times,” some old dinosaurs sang, “they are a-changin’”—especially for writers hungry for literary and commercial validation.
Posted by Gary Raham at 9:03 AM 2 comments: