On May 19, I accompanied some geologists to Pinewood Lake west of Loveland, Colorado. Sporadic rain and chill air dulled the greens of spring growth. Normally blue skies were slate gray. At one point we detoured off the dirt trail, traversed a meadow, and made a U-turn hook that forced us to climb down a couple of feet of exposed vertical slabs of rock. We had just crossed what geologists refer to as the “Great Uncomformity.” Above an extension of the vertical rock strata lay many layers of red, pebble strewn, compressed soils from a time on our planet when dragonflies the size of pigeons darted between alien, green-trunked trees soaring skyward to bottle brush tops covered in spores.

In geologist’s terms, uncomformities are places where layers of rock come together that are very different in age, as measured by radioactive dating techniques or recognized stratigraphy. Angular uncomformities are such junctures where the layers are at odd angles to one another—sometimes as much as 90 degrees. When geologists see this, the image can strike them a mental blow because of what it implies: stretches of time laid bare that are so vast as to shatter human comprehension.

James Hutton (1726-1797) saw such a feature in England. It consolidated in a flash what he already suspected: that the Earth was a tremendously old planet—much older than what Biblical scholars proposed. He went on to write a two-volume work, Theory of the Earth, which crystalized this conclusion for others. (I write about this in more detail in my book, The Restless Earth: Fossils, Chelsea House, 2009.)

The following information helps make the image of rock layers lying at right angles to one another so powerful. The oldest of the vertically oriented rocks at this site can be dated at 1770 to 1670 million years old (1.7 billion years). This age predates all life more complicated than single cells. The vertical rocks were originally deposited as ocean sediments at a time when dry land was a sterile desert. Over time, they were crushed to rock; then partially melted. Imagine the vast stretches of time to form layered muds and sandstones accumulating millimeter by millimeter, and then imagine the additional eons necessary to compress everything to a semi-molten sludge. And THEN imagine the slow heave of forces that twists everything upright: old ocean beds stood on end.

But that’s only part of it.

Imagine the forces of wind, water, and time scouring a billion years away to dust, carrying it somewhere else to settle. Then a new, slow cycle of deposition begins—piling up 300 million years of forests and dragonfly wings—until the dinosaurs die and mammals build their empires on the ashes left behind.

Now, two temporal dynasties of dirt lie at right angles to each other, with a monumental gap eroded to oblivion between them. THAT is the Great Unconformity. That is what humbled Hutton and every geologist since. They become mesmerized by temporal vistas exposed at the intersection of angled eternities. 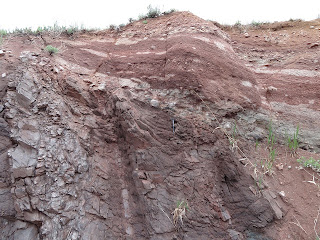 The Great Unconformity. Photo by Herb Saperstone
Posted by Gary Raham at 7:28 AM No comments:

I was contacted by a British author named Brian Grove with a very useful website--especially for relatively new authors--but he also has links to a long list of active publishers in a variety of genres and nonfiction areas within a global market. Seems like a nice concept for an author's blog. Hope you enjoy his site.

The address is: http://myperfectpitch.com/
Posted by Gary Raham at 6:29 PM No comments:

Sometimes images just won’t leave you alone. This was the case with the artwork I created for next year’s WIPS symposium on Ice Worlds and Their Fossils. We live during an interglacial period in Earth’s history, but we still have ice at the poles—a relatively rare event for much of Earth’s past. The Pleistocene ice ages forged human beings out of primates stressed by relatively rapid shifts in climate. Likewise, ice carved evolutionary changes in the Paleozoic, ultimately destroying the equatorial lycopod/fern/pteridosperm forests that now form our modern black energy reservoirs of coal and gas. I felt that snow among the alien plants of this era helped emphasize the impersonal forces of climate that have shaped the bodies and brains of not only us, but our distant forbears as well. We are built with elements cooked in the bowels of stars, but chiseled by shards of ice and the chill winds of time. 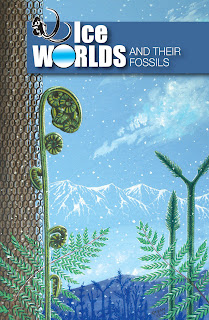