The 32,000 year-old stash of a Siberian arctic ground squirrel gave two Russian Scientists the opportunity to bring an ice age variety of Silene stenophylla, a narrow-leafed campion, back to life. The plant had shared the Siberian plains with mammoths, wooly rhinoceroses, and giant bison.  Silene serves as an example of the rich biological material encased in permafrost, an ice age legacy totaling almost one fifth of the land area on our planet.

The image I created for a November 2012 article in The North Forty News (http://www.northfortynews.com/resurrection-from-permafrost-and-other-ice-age-legacies/) shows what the resurrected plant looks like. The mammoth in the background represents the paleoartist’s longing to actually see an entire ice age landscape recreated—to be able to see into the past and witness firsthand some portion of the twisted road that led to our here and now. 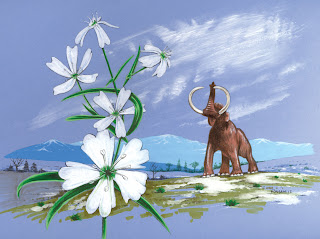 Posted by Gary Raham at 4:03 PM No comments:

Dr. Kirk Johnson, paleobotanist and educator extraordinaire at the Denver Museum of Nature and Scientist, gave a farewell speech October 1, 2012. The Smithsonian Museum saw an energetic, creative scientist with a vision for popular education and snatched him from our midst.  Assuming he follows the course he set for himself in Denver 22 years ago, he will transform the Smithsonian into an even more effective interface between people and what they need to know about their incredibly old and complex world.

Johnson still has the playful instincts of a child. In fact, he considers the world his sandbox and relishes each treasure he finds there—like the trove of fossils excavated in Snowmass Colorado last year—fossils that graphically illustrate an ice age world most of us would find hard to imagine. He wants people to understand and marvel at ancient heritages that lie beneath our feet, telling tales of struggle and evolution that ultimately produced our own imperfect, but sometimes promising, species.

Johnson emphasized the special time and place we occupy with mind-blowing timelines and scenes of Earth’s dynamic beauty. As a species we are poised to transform the Earth—either to benefit or decimate the rest of the living planet. We can’t act responsibly unless we know what that world contains and how it got here.

Johnson discovers, explains, and inspires like few people can. Those are three skills Washington D.C. could certainly put to good use. He promises to come back and charges Coloradoans to take care of “his museum” in the meantime—an institution that inspires more volunteers than any other natural history museum in the world!

Artist Ray Troll captured Johnson’s intensity and obsession with fossil plants in this illustration for Cruisin’ the Fossil Freeway (Fulcrum, 2007). Troll also captured me on a volunteer trip to Western Colorado that unearthed fossils for a museum in Vernal, Utah. I’m the Paleonerd on the right! 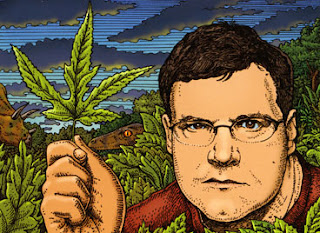 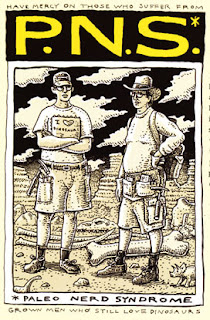