I didn’t really understand how addicting writing fiction could be. It fulfills needs: for approval, for enlightenment, for mastery of craft, for doing what feels natural to do. In my case, I resent diverting time to write other things—like these blogs, which serve largely as an advertising tool, and like creating articles that actually pay the bills. Fiction writing has never paid the bills for me—mostly because I abhor the time and effort it takes to cultivate a set of paying readers. I actually enjoy the writing process itself. And while I need and love an audience, it can be small, like a writing group. If anyone ever makes anything from my fiction it will have to be some descendant downstream with a talent for marketing.

But, let’s get back to addiction. I noticed that my last blog centered on my epiphany that I actually had a story to tell after writing 28,000 words of A Once-Dead Genius in the Kennel of Master Morticue Ambergrand. Once armed with that epiphany I charged forward and completed the book. I published it under the auspices of Penstemon Publications. I had it reviewed by colleagues, and eventually by Kirkus, who described it as “An enjoyable, post-apocalypse mind romp featuring technologically bred demigods, future Stone Age tribes, and supercilious worms.” Kirkus even compared me favorably with Kurt Vonnegut and Arthur C. Clarke. (Yay!) The book became a finalist in the 2019 Colorado Authors’ League Awards. But, to date, it has not generated income. It has consumed income.

So, of course, I am writing a sequel: A Twice-Dead Genius Comporting with Misunderstood Abominations. And I’ve now written about 28,000 words and—I’m pretty sure I have another story to tell. Go figure. This story (hopefully) will tie together A Once-Dead Genius with A Singular Prophecy, another novel which I didn’t know was the prequel to the second.

I plan not to rush, even though time could be an issue. I’m 72. I’m hoping if I write enough stuff and paint enough pictures, someone will get the ball rolling and decide to buy everything I’ve ever created—perhaps multiple times—and fill my pockets with cash. Should I fall short of that goal, I will settle for a healthy “Well done!” from some crazed individual who also thinks they just read a great story (when I get this one written, of course).

Perhaps that crazed individual could be you.

As a postscript: The image that accompanies this text may turn out to be the cover of the novel-in-progress. The trees are Mother Trees: the long-lived life stage of some aliens (The Grovians) who have an alternation of generation life cycle. (More on that later.) 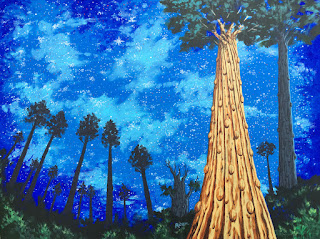 Posted by Gary Raham at 2:09 PM No comments: