Our distant primate ancestors lived in a near tropical Eden 55 million years ago. Ten million years after the extinction of the dinosaurs, the world’s ecologies had settled into a hothouse time. No ice existed at either pole, sea levels were high, and places like Wyoming, Colorado, and Utah sported a unique mix of tropical and temperate plants and a system of great lakes that dwarfed Michigan’s post-glacial waterways.
Lake Uinta, for example, during the Early to Mid Eocene covered over 24,000 square miles—more than three Michigan “Great Lakes”—in a great basin carved amid the general uplift of the Colorado Plateau. This Lake persisted for 17 million years—85 times longer than the 200,000 year-old-history of our species. Deposits of silt ultimately formed the Green River Formation, perhaps the deepest lake deposits in the world, piling up 7,000 feet deep in places.
I’ve created two images of this bioscape, one for The Deep Time Diaries (Fulcrum, 2000) and one that was published in a 2003 symposium program for the Western Interior Paleontological Society whose theme was “Volcanoes, Camels, and Carnivores.”
“Eyes in the Forest” depicts a lemur-like human ancestor named Notharctus. She lived in a forest of palms and alders, sycamores and chestnuts. Pythons curled in the branches. A six-foot-tall predatory bird, Diatryma, occupied the apex of the food chain. Her eye glows red in the picture’s background. 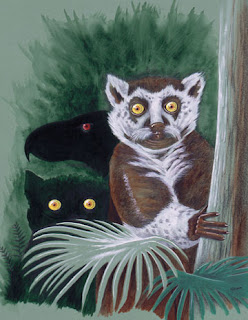 “Eocene Eden” shows more of the forest and it’s inhabitants, including the primitive and tiny horse, Hyracotherium. Our human future lies latent here. This paradise will midwife countless species of mammals, flowering plants, and birds before the world grows colder and dryer. Grazing-tolerant grasses will spread from enclaves like this and carpet vast areas of the planet during the Miocene. 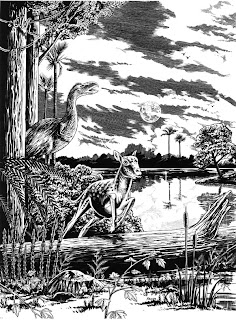 Today, climatologists predict we are heading toward a similar hothouse world—largely due to human activities that have boosted atmospheric levels of carbon dioxide not seen since the Eocene. We are accelerating the rate of change, however, from millions of years to decades and centuries—something that will severely stress biodiversity and the biosphere’s capacity to cope.
One possible solution to the problem may be to genetically engineer crop plants so that they are perennial instead of annual. This would increase crop yields, reduce erosion, and eliminate tilling, which will turn agricultural soil into a carbon sink. Douglas Kell, chief executive of the U.K.’s Biotechnology and Biological Research Council, has calculated that replacing 2% of the world’s annual crops with perennials each year could remove enough carbon to halt, and eventually, reverse the trend of increased atmospheric carbon dioxide.
An Eocene-like hothouse world would not be an Eden for us.
Posted by Gary Raham at 9:31 AM