Margulis and the Five Kingdoms 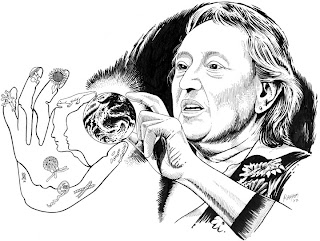 I mentioned Lynn Margulis to Jane Schellenberger, editor of Colorado Gardener magazine, and she agreed that Lynn was a person to know about. Consequently, my article, “Lynn Margulis: champion of the microcosmos,” will appear in the spring issue of the magazine. I created an illustration to accompany the piece that incorporates Margulis’ image with a graphic designed by her son, Dorion Sagan, which represents the Five Kingdoms of life on our blue planet.
The hand metaphor emphasizes that all life on earth is related on a fundamental level. The thumb represents the kingdom of bacteria, linked with a host of other microbial species that spread across the base of the hand. Scientists now believe that two Domains—larger classification units than Kingdoms—separate the Archaea (Archaebacteria) that may represent the original colonizers of the planet, from the Eubacteria, that ultimately gave rise to all the rest of modern life forms. The little finger represents the still microscopic, but more complex menagerie of Protoctista, that includes amoebae, ciliates, slime molds and other creatures you may have encountered in science class when you looked through a microscope. The other fingers represent the more familiar kingdoms of fungi, plants, and animals. Together with the inorganic parts of our “third rock from the sun” they form the Biosphere—a construct durable in its foundations, but fragile in the crystalline complexity of global interlocked ecosystems and the snowflake towers of human civilization.
Copernicus removed our illusion of being at the center of the universe. Darwin removed our illusion of being a special act of creation. Margulis stripped away yet another layer of ego, by pointing out that humans and all complex life forms are just microbial high rise condos. Good scientists have a way of keeping us humble, as long as we make the effort to listen.
Posted by Gary Raham at 2:25 PM